Make your own professional static & animated cursors for all versions of Windows.

Compatible with development industry standards such as Photoshop & Illustrator. 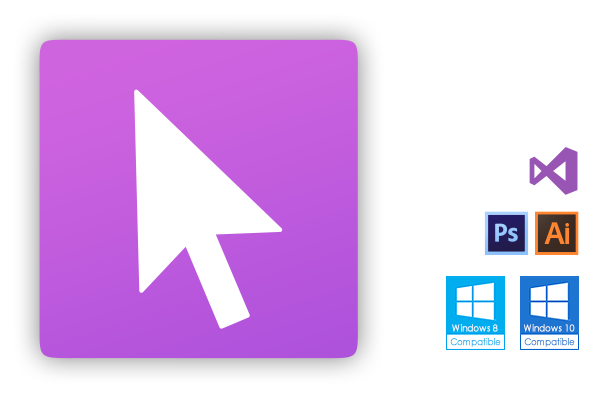 Pay once and get all future releases for free!

Make Your Own Professional Cursors

One license is required for each developer using the product.

With CursorWorkshop make your own hi-quality static & animated cursors for your Windows applications as well as websites. The product generates CUR & ANI files.

Axialis CursorWorkshop allows creating all kind of Static Cursors for Windows (extension CUR). All sizes and color depths are supported up to RGB with alpha channel (for Windows XP to Windows 10).

Use the advanced editor to make Animated Cursors (extension ANI). Many features permits creating smooth animated pointers. You can edit each frame in a powerful editor, specify the display delays and see a live preview of your animated cursor while you create it.

The whole CursorWorkshop interface was designed to increase your productivity:

Professional Cursor Creation for Everyone

CursorWorkshop was designed with one idea in mind: "Allow everyone to create hi-quality cursors, even without drawing skills". In addition to a classic multi-resolution image editor that you find in all cursor authoring applications, several tools have been added to help you creating professional cursors in a snap:

If you work with Adobe products, you'll enjoy CursorWorkshop plug-ins for Illustrator® and Photoshop®.

Once installed, the plug-ins will let you transfer images directly from your Adobe application to CursorWorkshop without saving a temporary file.

With CursorWorkshop make your own hi-quality Static & Animated cursors for Windows applications and Websites.

The new generation of cursors uses variable transparency (alpha channel). This feature permits creating beautiful cursors with smooth borders and shadows. You need a professional tool to create such cursors. Axialis CursorWorkshop has been designed with one goal in mind: "Create Quality Cursors in a Snap".

Enjoy the powerful editor which permits creating the various image formats of a cursor from an original drawing without quality loss. The cursors can be created to customize Windows or enhance applications. You can also add your own cursors in your websites.

Work in a fully Integrated Workspace

CursorWorkshop™ features a fully integrated workspace. Some cursor tools available on the market are made of several programs resulting in applications which are difficult to use. In CursorWorkshop™, all features are available on screen. This interface lets you be more productive than ever.

Axialis CursorWorkshop allows creating all kind of Static Cursors for Windows (extension CUR). All sizes and color depths are supported up to RGB with alpha channel (for Windows XP to Windows 10).

Many features are implemented to help you creating your static cursors in minutes: create all image formats from images in one click, create new formats from existing ones, use of ready-to-use image objects and more.

Use the advanced editor to create Animated Cursors (extension ANI). Many features permits to make smooth animated pointers. You can edit each frame in a powerful editor, specify the display delays and see a live preview of your animated cursor while creating it.

You can import PSD images with layers from Photoshop® and easily create a multi-resolution cursor from a Photoshop artwork.

The product also includes Plug-ins for Adobe Illustrator and Photoshop. Once installed, the plug-ins will let you transfer images directly from your Adobe application to CursorWorkshop without saving a temporary file. Click below to read more:

The use of image objects to create cursors is an exclusive feature of CursorWorkshop. It permits creating professional-looking cursors in minutes using a few mouse drag & drops.

The principle is quite simple: A large quantity of basic image and animation objects are provided in a library. By associating them together (on top of each other) you create your own cursor.

The images objects, which have been made by professional designers, are provided in 128x128 or 256x256 high-quality PNG format. By adjusting colors, lightness and contrasts, the possibilities are almost infinite.

Read the following articles if you want to learn more:

Autodesk FLI/FLC is the standard animation format used by 3D modeler applications like 3DS Max or Cinema 4D. Create your 3D object, animate it and save it as FLI. Open it in CursorWorkshop and create your ANI file in seconds.

Many GIF animations are available on Internet. Axialis CursorWorkshop allows you to open any animated GIF from a web page and easily create an animated cursor from it.

We have created a professional and comprehensive help in CursorWorkshop to permit you to learn all the features included in the product. Unlike other competitor tools, the help file describes more than the product features. It is amply illustrated and written in easy-to-read English. It includes following topics:

Batch procedures have been implemented in CursorWorkshopâ„˘ to automatically perform operations on a large number of files.

For example, you can create cursors from a set of PNG files (CUR/ANI files are created).

Use a powerful librarian to easily manage all your media and cursor files. This is an integrated window (which can be hidden) where you can store, move, copy and extract all the files you're using in your work (images, cursors, libraries).

Also, A built-in file explorer permits to browse your disks and find files including images and all files containing cursors. This advanced explorer permits to display files in thumbnail mode. By a simple click you open any file in a viewer or editor window

This FAQ covers most common support questions related to CursorWorkshop. If you can't find a response in the list below, you can Contact Axialis Team.

If you have questions about your purchase, registration or your customer account, please read the Customer FAQ.

Axialis CursorWorkshop is a professional cursor authoring tool which permits creating hi-quality static (CUR) and animated (ANI) cursors. It supports all image formats in cursors up to RGB with alpha channel.

This all-in-one application includes all the features you need to work with cursors: an editor to create from scratch or retouch cursors; tools to create static cursors from images (PSD, BMP, PNG...) or animated cursors from filmstrips, animated GIF or FLI/FLC animations; use 2 plug-ins to transfer your artwork from Photoshop and Illustrator; use thousands of ready-to-use image objects that you can assemble together to create cursors and more...

There are at least 3 reasons to create cursors:

Is CursorWorkshop compatible with Windows 10?

I work with Adobe Photoshop & Illustrator. Can I use them with CursorWorkshop?

Yes. You can install plug-ins that will let you transferring an image from Photoshop/Illustrator into CursorWorkshop directly without using a temporary file.

Another great feature is the ability to use ready-to-use Photoshop templates. They permit creating icons in different formats using the professional tools of Photoshop, then export the whole cursor in one step into CursorWorkshop. You can even create your own templates.

I use to work with transparent PNG images. Can I create cursors from PNG?

Yes. You can open any transparent PNG (and even PSD, BMP or GIF) in the product and create a cursor with its different formats in one click. You can also use PNG filmstrips to create animated cursors. You can even create several cursors from a set of PNG images in one batch operation.

I'm not good at drawing, can I use CursorWorkshop?

Yes. Using ready-to-use image objects, you can create attractive cursors using a few drag & drops. Registered users can download thousands of objects from our website and create professional-looking cursors in a few minutes.

Can I distribute my cursors?

Yes. CursorWorkshop permits compiling a cursor library (set of cursors on one file) and create a handy installation package. The user will easily install it on his computer. You can even create key-protected installations to sell your cursor sets.

What about future versions? What's Axialis policy on upgrades?

Axialis CursorWorkshop is living, so periodically we release new versions. Axialis policy on updates is the clearest possible: FREE UPGRADES FOR LIFE.

There are plenty of good reasons for purchasing CursorWorkshop, but here are the top 5:

One professional tool for all your needs

CursorWorkshop is a professional tool designed to Create, Extract, Convert, Manage and Redistribute Cursors. You create professional looking cursors. You work like a pro, you're seen as a pro.

Many easy-to-use features permit to create static and animated cursors from existing images and animations.

No complicated settings, no more pixel-by-pixel cursor making. All has been designed to let you be productive and get professional results in minutes (using image objects for instance).

Some image object packs are available to registered customers only. By purchasing you get a lifetime access to these packs.

You pay for the program once and get all future versions for free. No condition, no hidden terms, 100% free, period.

When you purchase an Axialis product, you get a lifetime license. What does it mean exactly?

What do we mean by Lifetime License?

You pay for the program only the first time and get all new versions of this program for FREE and for lifetime. It works with is a built-in update system which operates through Internet to automatically upgrade your application to the latest release using a patching system. All new program releases will include this feature.

How does it work?

When you purchase and install an Axialis program, you are prompted to register online. The first time you register you specify a personal Username and Password. Don't loose them, they are requested each time you upgrade your application online. When you use your program, click on the upgrade button. The program connects to our server and checks for a new version. If this is the case, a patch is downloaded and your application is upgraded for free. Friendly isn't it?

What about about the future?

If you purchase a product now, you're entitled for a Lifetime License. It means that you're guaranteed to get free upgrades for life. If we decide to change the terms of the Axialis EULA in the future, this will be applied to new licenses only. In all cases, you'll keep the lifetime license benefits.

Free for a lifetime? Really?

Yes, you pay once and get all future versions for free. That's as simple as it gets! No condition, no hidden terms, 100% free, period.

There are many options and features that can be added to your cursors so you will not just have high quality,
but also the look and characteristics you want.